A Comparison of Classical Japanese Literature and Classical Greek Literature, from the Perspectives of Poetry and Society—Greek Tragedy and Noh 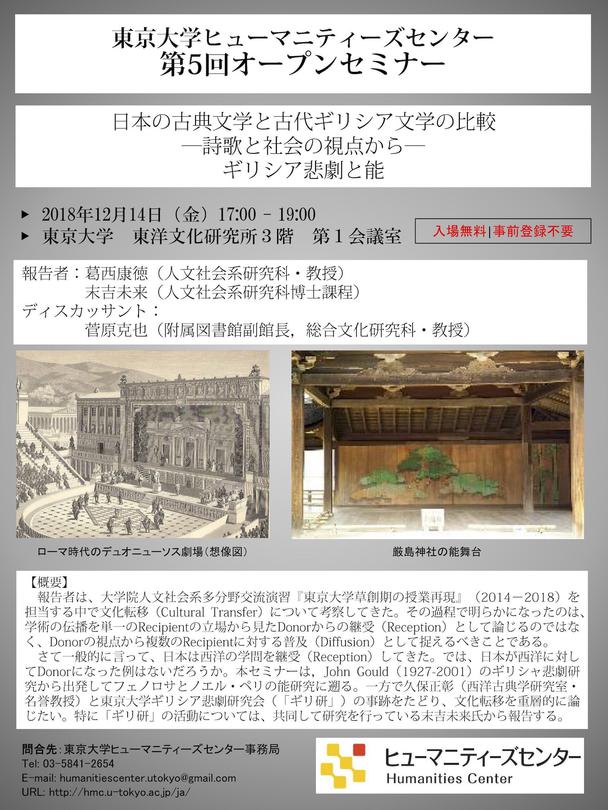 This writer previously studied the subject of cultural transfer while leading "Animating the Lectures of Tokyo University at the Foundation Days" (2014-2018), an interdisciplinary exchange seminar presented by the Graduate School's Humanities and Sociology Department. What became clear during this process was that the transmission of scholarship should be regarded not as "reception" from a donor seen from the standpoint of a single recipient, but as "diffusion" to multiple recipients from the perspective of a donor.

Generally speaking, Japan has "received" scholarship from the West. But can't we find examples of Japan being a "donor" vis-a-vis the West? This seminar will start from John Gould's (1927-2001) research on Greek tragedy and trace back to the research on Noh carried out by Ernest Fenellosa and Noël Péri. At the same time, it will follow the footprints of Kubo Masaaki (Professor Emeritus, Greek and Latin Classics) and the students' Greek theatre company at the University of Tokyo ("Giriken") and consider cultural transfer in a multi-tiered way. In particular, the activities of Giriken will be explained by Mrs. Miku Sueyoshi, with whom this writer has carried out collaborative research.