The Debate around Classical Education: A Consideration Based on 19th Century Examples in Japan and the U.S. 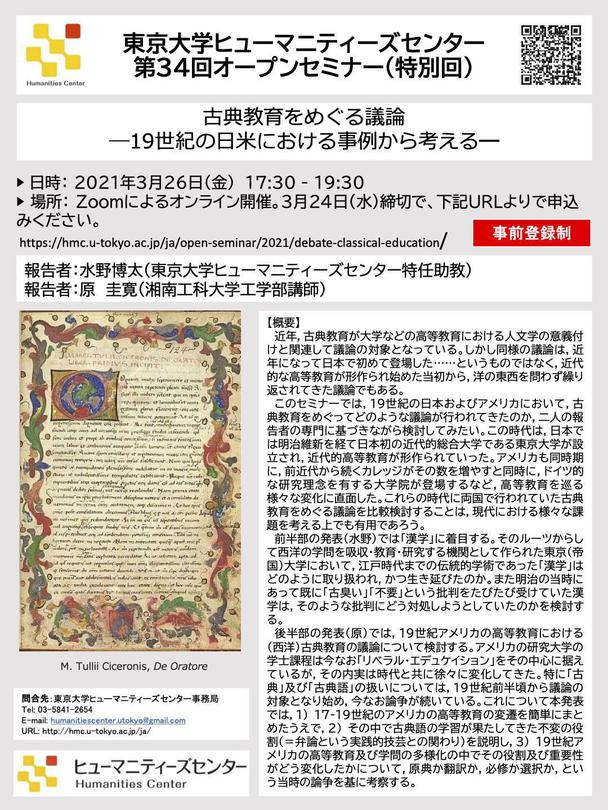 In recent years, classical education has become the focus of debate in the context of defining the humanities in university and other higher education. However, rather than being something that has only recently come up for discussion in Japan, this debate has been repeated in both the West and the East ever since modern higher education began to take shape.

In this seminar, we consider what kind of debates around classical education took place in both Japan and the U.S. in the 19th century, based on insights from the speakers' fields of specialism. The period after the Meiji Restoration saw modern higher education in Japan take shape and Tokyo University (now the University of Tokyo) established as the nation's first modern university. Around the same time in the U.S., the number of colleges increased, continuing a trend that had begun in the premodern era, and various changes took place in the field of higher education, such as the emergence of graduate schools with German-style research philosophies. A comparative examination of the debate around classical education in the two countries during this period could be useful in considering various issues faced today.

The second presentation (by Yoshihiro Hara) will consider the debate around Western classical education in 19th-century U.S. higher education. Although bachelor's degree programs at U.S. research universities today are still centered on a "liberal education," the content has gradually changed with the times. The treatment of classical literature and classical languages in particular became the focus of discussion in the first half of the 19th century and the debate still continues today. In this presentation, I will 1) provide a simple summary of changes in U.S. higher education between the 17th and 19th centuries, 2) explain the abiding role that the study of classical languages played therein (specifically, the relationship to the practical art of debate), and 3) consider how the role and importance of a classical education changed as higher education and learning became more diverse in 19th-century America, based on the arguments of the time around whether texts should be studied in the original language or in translation, and whether these subjects should be compulsory or optional.