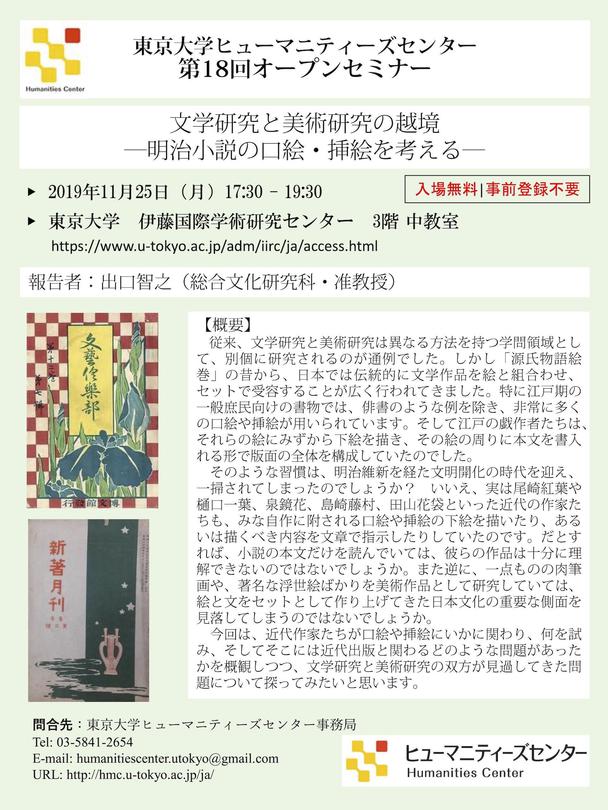 It has been customary to carry out research in literature and art separately, as academic fields with different research methods. As far back as the "Genji Monogatari Picture Scroll," however, there has been a widespread tradition in Japan of combining literary works with pictures and consuming them as sets. In particular, Edo-period books intended for the general public (with some exceptions such as haisho) made extensive use of frontispieces and illustrations. In fact, Edo-period fiction writers drew rough sketches for these illustrations themselves, and wrote the story text around these pictures to create the overall page layout.

Was this custom completely done away with in the period of westernization following the Meiji Restoration? Actually, no ── modern writers such as Koyo Ozaki, Ichiyo Higuchi, Kyoka Izumi, Toson Shimizaki and Katai Tayama either drew rough sketches for the frontispieces and illustrations of their works, or specified in writing what the illustrations should depict. This being the case, it might be said that their works cannot be fully understood just by reading the story texts. Conversely, one could argue that if we only study individual paintings or famous ukiyo-e prints as works of visual art, we miss an important aspect of Japanese culture created through the combination of pictures and text.

In this study we will examine issues previously overlooked in both literary and art-related research, while outlining the ways in which modern writers were involved in frontispieces and illustrations, what they attempted to do, and problems they encountered in engaging with modern publishing to realize their aims.