Japan and the Netherlands
日本とオランダ 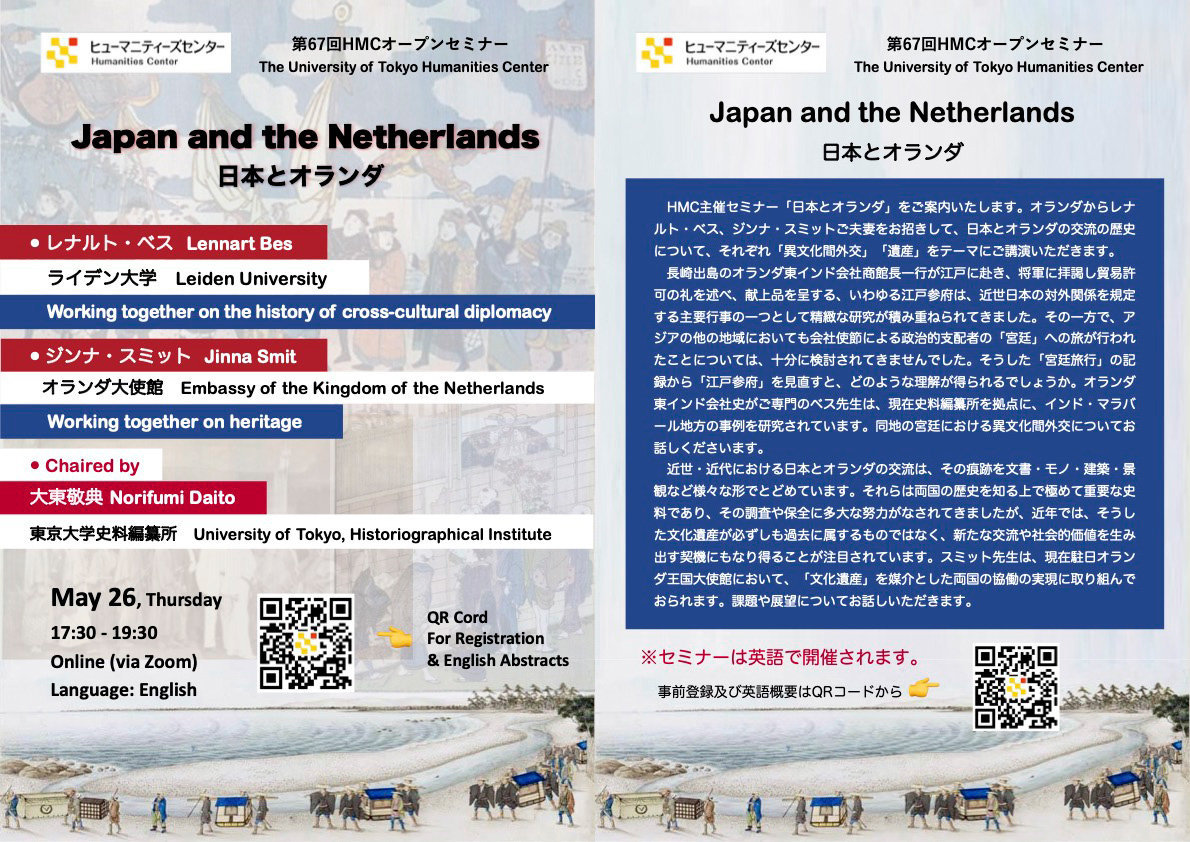 Lennart Bes (Leiden University)
Japan and the Netherlands: working together on the history of cross-cultural diplomacy

Japanese and other historians have extensively studied the annual diplomatic missions of the Dutch East India Company (VOC) at Deshima island to the Shogunate court at Edo. The Historiographical Institute of the University of Tokyo plays an essential role in facilitating the research of these co-called hofreizen (court journeys), having published many of Deshima's Dutch dagregisters (diaries) and translated them into Japanese. One reason why these diaries are available for historians, is that the VOC records created and kept at Deshima itself are still preserved, which is not very common for such local VOC archives.

The reports of these hofreizen provide much information on Japanese-Dutch relations and local developments in Japan. However, these missions have hardly been placed in a wider Asian-Dutch diplomatic context. To gain more understanding of the special nature of the hofreizen to Edo, we need to compare them with Dutch missions to other Asian courts. We can investigate for instance the reasons, frequency, and length of missions to different courts, how the required court ritual was observed (or not), the exchange of gifts, interaction with rulers and officials, and how (un)successful hofreizen were.

With these questions in mind, Lennart Bes presently spends a semester as a foreign visiting researcher at the Historiographical Institute, with a grant provided by the Humanities Center. During this stay he collaborates with Norifumi Daito of the Historiographical Institute, aiming to explore Dutch hofreizen from a broad, multi-regional perspective. While Norifumi Daito works on missions to Persia under the Safavid emperors, Lennart Bes focuses on missions in south India, especially the many small kingdoms in the Malabar or Kerala region. Like Deshima, this is an area for which the original, local VOC archives still exist. Also utilising the extensive knowledge on hofreizen to Edo available at the Historiographical Institute, we attempt to put all this cross-cultural diplomacy in a wide, pan-Asian context.

Lennart Bes studied Indology at Leiden university, worked for over a decade at the Netherlands National Archives where he researched VOC archives worldwide, and wrote his PhD dissertation at Nijmegen Radboud University about court politics in early modern south India, combining Indian sources with VOC archives. Since 2013 he has been teaching Asian history, Dutch colonial history, and archival studies at Leiden University's Institute for History.

For the Netherlands, international connections have always been necessary in order for the country to thrive. As a result, a Dutch presence continues to resonate in many parts of the world, such as in the Dutch Trading Posts in Japan, the colonial mining system in Indonesia, or the stories of a Dutch ship wrecked off the coast in Brazil.

Such heritage shows how the history of the Netherlands became intertwined with that of other countries and cultures, but it also presents opportunities to build new connections. After all, each country cares for its heritage and thus faces similar issues, such as managing archival and museum collections, identifying new functions for built structures, and conserving cultural landscapes. Also, each country deals with societal challenges, for which heritage can have added value. Think of the potential of heritage to contribute to an inclusive society, to provide lessons for dealing with climate change, or to enhance urban development. Therefore, to facilitate that the Netherlands and partner countries can learn from and inspire each other, the Netherlands Government seeks international heritage cooperation.

In her presentation, Jinna Smit will discuss the International Cultural Policy of the Netherlands Government. For institutes and experts in Japan, this policy provides opportunities to work together with organizations and professionals in the Netherlands. But what are the potential benefits of such collaborations? How can such partnerships be initiated? What are the requirements? And what are the roles of the Netherlands Embassy in Tokyo and other Dutch organizations in implementing this policy? While sharing this information, Jinna Smit is very much interested in the input of the audience.

Bio: Jinna Smit works at the Cultural Heritage Agency of the Netherlands, which is part of the Netherlands Ministry of Education, Culture and Science. Trained as historian and archivist, she has worked in the field of international heritage cooperation since 2010. From April to August 2022, she is in Tokyo to assist the Netherlands Embassy in identifying the topics heritage organizations and experts in Japan and the Netherlands would like to work on together.